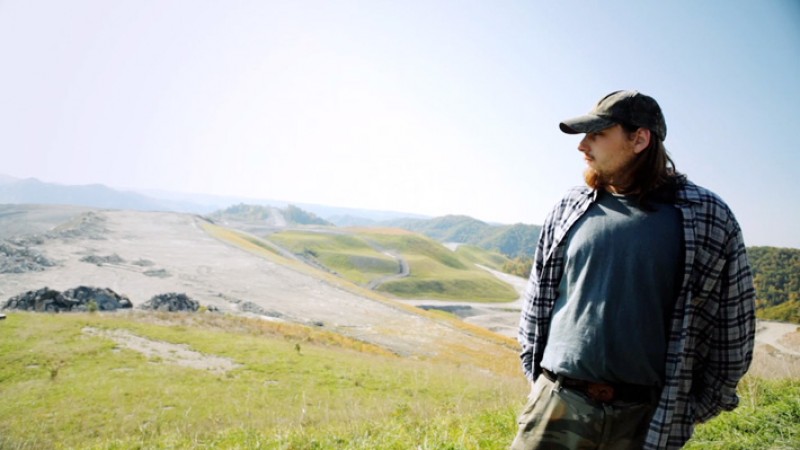 Coal River, WV: All along West Virginia’s Coal River sits the former boom towns of the American coal rush. Depopulation, the result of declining demand as the U.S. finds alternative sources of energy in natural gas, shale oil, and sustainable energy options, has gutted many of these towns. But the coal industry is alive and well in West Virginia’s Appalachian Range and to the some 25,000 remaining residents of Boone County, through which Coal River winds northward, the special brand of mining still practiced in the surrounding  mountains has proved particularly hellish.

Among these residents is Junior Walk. Junior grew up in the Appalachian mountains, in the small coal town of Unus, WV, and he says his entire life has been marked by the presence of coal. Coal trucks, coal dust, coal mines, coal miners, and coal sludge. Billions and billions of gallons of toxic coal sludge, in fact.

“Honestly, You Never Really Think About It When You’re Growing Up Around Here”

Junior attended Marsh Fork Elementary School, some 300 yards down-mountain from the Shumate Branch Impoundment, a massive earthen dam used to stem the runoff of coal sludge, a natural byproduct of coal mining. At this particular impoundment, some 2.8 billion gallons of sludge rest just above the school and the small mining community it serves. Still, Junior maintains that it never occurred to him that the scenery of his childhood was anything exceptional. Everyone spends their formative years listening to the not-so-distant clap of mining explosives, right?

One day, Junior recalls, a childhood teacher invoked threats of imminent death to corral unruly students in his class, “If you kids don’t sit down and shut up right now, that dam up there’s going to break and kill us all!”

For Junior, this memory is distinct: a child growing up in coal country, doesn’t often take the time to ponder the uniqueness of his or her surroundings, much less the potential for disaster. The possibility struck a chord and suddenly Junior looked upon the Shumate Impoundment with a newfound appreciation for the precarity of the situation. So too, did he understand suddenly the negative effects coal mining had exacted on his community. From there, Junior embarked on a path of advocacy which brought him to Coal River Mountain Watch (CRMW), a regional conservation group for whom he now serves as Outreach Coordinator.

Success Against All Odds

Junior and CRMW take a grassroots, data-driven approach to fighting Big Coal that seeks to benefit both the environment and the community. This is important because according to the CRMW website, the type of mining practiced around Coal River is among the most destructive mining tactics in use today.

Mountaintop Removal (MTR) mining is popular throughout the Appalachian Mountains because it a wildly efficient way of exposing coal seams. It is also a mining technique bluntly named: the process involves literally decapitating mountains and displacing their peaks into surrounding valleys. While this has devastating effects on the surrounding ecosystem, it is equally damaging to the miners and their families in the surrounding area because of the noxious dust it releases into the air.

In 2014, the scientific journal Environmental Science and Technology published the first conclusive study showing a direct correlation between a community’s proximity to MTR mining operations and an increased risk of lung cancer. While representing an advance for science, this was old news for Junior and CRMW, who have been vocal about the collateral damage of MTR mining since 1998.

CRMW recognizes the ubiquity of the coal industry in Appalachia; here, every facet of life is influenced in some way by coal. Similarly, Junior and his colleagues at CRMW understand the ubiquity of health issues amongst their neighbors and friends. As an issue that affects everyone, miner or otherwise, CRMW emphasizes an inclusive approach to the fight against abusive mining practices. They work in their own communities to organize and educate neighbors to challenge mining permits and call on elected officials to serve in the public interest, rather than in the interest of the energy sector.

The Fight Isn’t Over

A brief survey of the landscape around Coal River is startling- all around, mountains have been forcibly plateaued in the hungry search for coal resources. Of the three largest peaks in the area, two, Kayford and Cherry Pond, have already been decapitated. Since 2012, CRMW has successfully stalled efforts by Alpha Natural Resources to stripmine the peak of Coal River Mountain, the sole mountaintop left in the Big Coal River ecosystem.

Also in 2012, CRMW won a battle close to Junior’s heart: Marsh Fork Elementary was relocated away from the base of the Shumate Impoundment.

Mere miles away from Junior and Marsh Fork Elementary, however, at the toe of the Brushy Fork River, sits the largest earthen dam in the Western Hemisphere. Measuring over 700 feet at its vertical diameter, the Brushy Fork Impoundment rivals the Hoover Dam in magnitude and in 2013, federal regulators passed a motion to make it even bigger. The Hoover Dam, according to the Arizona Power Authority, harnesses the hydroelectric potential of the Colorado River to provide energy to over 8 million people across the American Southwest. Behind the Brushy Fork Impoundment however, sits not water, but 8.5 billion gallons of toxic waste, left behind from MTR operations on the surrounding peaks.

All this to say that coal remains the lifeblood of Appalachia and with the natural gas boom accounting for more and more of America’s energy production, the economic situation is becoming increasingly dire for the country’s coal towns and the mining operations which back them. President Obama has recently taken steps to alleviate the issue but even so, Walk and the CRMW are facing an uphill battle in their own backyard: many residents have chosen to relocate rather than fight back and for the rest the decision amounts to a choice between health concerns later, or a livelihood now. Junior however, remains optimistic, convinced that it’s fundamentally a matter of doing the right thing. For him, that means tirelessly raising awareness  and seeking the support necessary to address the myriad challenges facing the coal communities of Appalachia.

(Visited 90 times, 1 visits today)
← Event: Telling Stories to Connect People to Your Cause; San Francisco, CA A Roof Overhead is a Fighting Chance in Nicaragua →