A Survivor Recruits Rwandan Girls for A Better Future 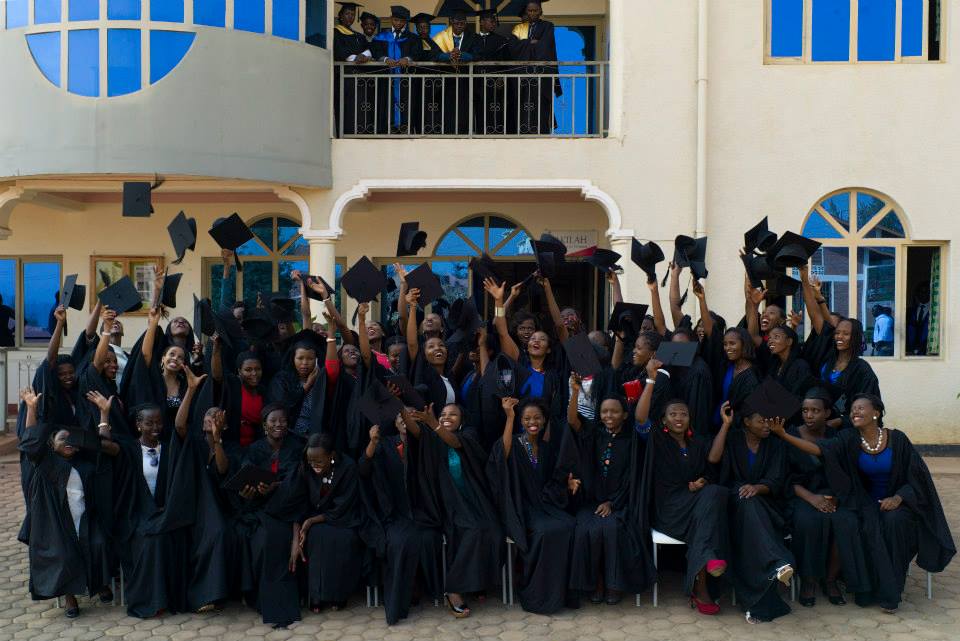 Editor’s Note: Nadine Niyitegeka survived the horrors of the Rwandan genocide, would let nothing stop her from exercising her right to an education and now works to expand educational opportunities to girls in Rwanda through her job with the Akilah Institute. Nadine’s chapter in the My JOB book provides an in-depth view into the life of a survivor who now uses her experience to help others.  Below is a glimpse into her inspiring story.

Beyond Genocide, Hope for a Future 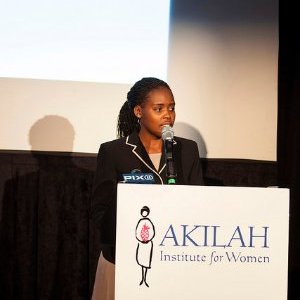 Nadine speaks at the 2015 Futures Without Violence Conference. Photo courtesy of Nadine Niyitegeka.

Nadine grew up in the midst of the 1994 Rwandan genocide.  The worst ethnic cleansing since the Holocaust, some 800,000 Rwandan Tutsis were murdered at the hands of a Hutu majority, who were spurred to violence by political brinksmanship. As a two-year-old girl, Nadine hid with her family from attackers – themselves often neighbors, friends, and colleagues – in the home of trusted family.

Even as the carnage subsided, and the process of healing began in Rwanda, Nadine struggled to find hope in a better future. She was the eldest daughter of a single mother with four children.

As an adolescent, she often went without meals. Nadine’s mother even cautioned her against making the long journey by foot to school for fear that she would faint in the road. In addition to the struggles of poverty, Nadine was striving for education in a country where only 1% of the total population pursues a degree; of that 1% only a third are women.

“I learned a lot growing up in that kind of life. As I grew up, my life started getting better. I’d say that it was kind of sad to look back, but it was like a lesson that no matter what kind of challenges we got through, you can get to a bright future. What made me happy is I was educated, and I got a job, a good job, after graduating.” – Nadine Niyitegeka

Despite these challenges, Nadine overcame hunger and poverty to complete her secondary schooling.  A coworker at an early job in a supermarket recommended she continue her studies at Akilah Institute. The rest is history.

A heavy emphasis on education reform drove the Rwandan recovery, specifically around access for Rwandan girls. Akilah is one organization that knows that women’s education is key to the path forward for Rwandan society. The Akilah model is built on the belief that women are best positioned to propagate an advanced, educated society. What’s more, the directors of Akilah tailor their curricula to the needs of Rwandan businesses, ensuring that their students are the most desirable in the job market.

Listen to Nadine’s story in her own words.

The Akilah Institute, however, is selective: admissions rely on an intensive interview process and, as a result, is highly competitive. For those admitted, the Akilah Institute offers an unmatched educational opportunity for its students: a typical graduate earns five times more than the national average and benefits from the school’s 90% job placement rate.

A Labor of Love

Today, one could hardly tell that a woman of such remarkable poise was brought up amid the worst human tragedy in the post-Cold War era. Nadine holds a degree in hospitality management and turned down an offer from Marriot International in order to serve as Development and Recruitment Associate with Akilah Institute. In her role, Nadine works to expand educational opportunity to the neediest girls in Rwanda. For her it’s a labor of love: Nadine believes that women are not just job seekers, they’re job creators because of their unique position at the head of the household. She’s certainly opened doors for Rwandan girls; even Nadine’s younger sister is soon to be an Akilah alumnae.

Rwanda has proven an exemplar of post-conflict reconstruction and gender equity has been a central tenet. It is the only country outside of Europe to be ranked in the top ten countries in terms of gender equity. It’s an impressive achievement for any country, much less one only a little more than two decades removed from a horrific genocide.

At the heart of Rwanda’s success has been a concerted effort to reform education and to make all facets of society more accessible to women. In the wake of the genocide, Rwanda instituted gender quotas in elected government. In doing so, they placed a celebrated theory in international development front-and-center: that the path to sustainable progress lies through women and, specifically, through their capacity to serve as shepherds of a new generation committed to peace and prosperity. Today, women hold 64% of the seats in Rwanda’s parliament, good enough to place first in the world.

That said, while Rwanda ranks 1st in the world in gender parity in government, when considering the larger workforce, it’s overall ranking sinks to 163rd according to the UNDP.

The main culprit is Rwandan women infrequently have the support or means to pursue higher education; which is to say that Rwandan women who hold degrees are well-positioned for a career in government but, without that degree, Rwandan women do not fare better than any other countries with lower gender equity policies. Enter organizations like Akilah, and individuals like Nadine, who above all, recognize that everyone, regardless of tribe, gender, or age, should be represented under the law and afforded the opportunity for decent work.