Mideast Diplomat Greg: Seeking the Peace in Everyone 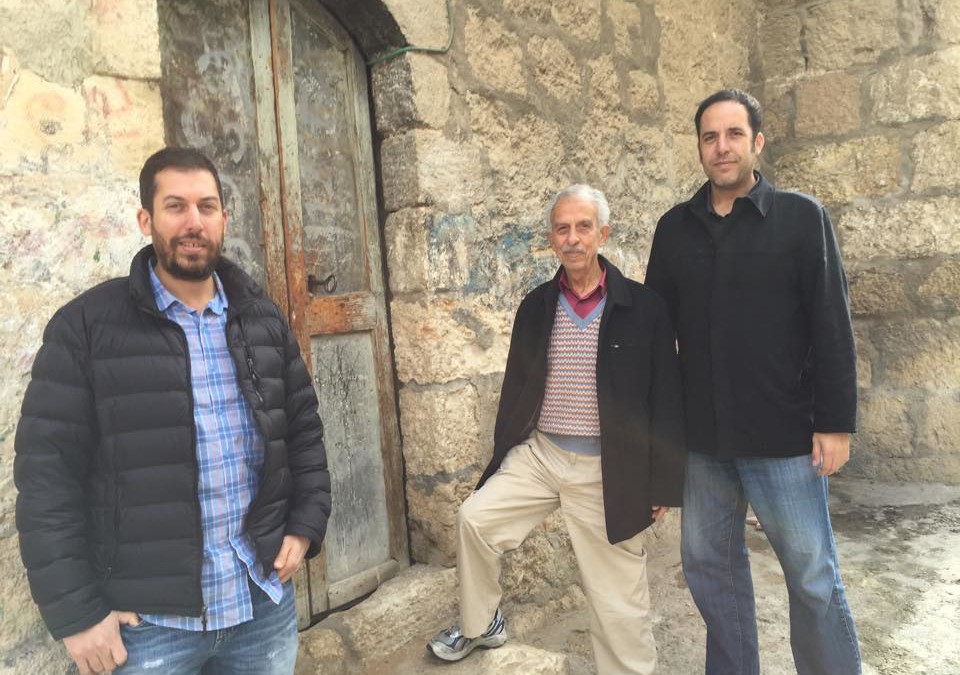 The Conflict for Which There Are No Words

Map of Israel and Palestine. Photo courtesy of Encyclopedia Britannica.

In the past several weeks, international attention has focused on Israel and Palestine, where a resurgence of violence has onlookers fearing a major conflict may well be imminent. In the modern Israel-Palestine conflict, rife with political posturing and desires marred by violence, everyday Israelis and Palestinians are seeking safety, stability and respect–while leaders take increasingly hardline positions.

Yet, beneath the overtures of political posturing by opposing regimes, exist real, everyday people with real, everyday problems which–while not being quite as magnetic to media coverage as words like ‘intifada’ and ‘settlements policy’–reflect a commonality between supposed enemies that provides hope for a better future.

Being on the Ground in Israel and Palestine with Greg

Just weeks ago, I was on the ground in Israel and Palestine, two countries whose tragic histories have intertwined so tightly that neither can now breathe, with or without, the other. I cannot even begin to understand the legacy of trauma or the complexity of attacks and retaliations born from Israel’s desperate need to come home, broken after the Holocaust, in 1948, and Palestine’s suffocation after decades of deprivation of freedom and land. 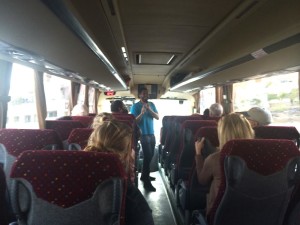 Luckily, I was not alone. Traveling with a pro-peace group of Americans guided by The Telos Group, my friends and I were in the capable, compassionate hands of president and cofounder Greg Khalil, an American attorney-turned-diplomat who’s devoted his life to Mideast Peace.

When I met Greg, the first thing I noticed is that he’s very tall. He embodies a blend of three cultures: European (his mother’s Danish family immigrated to the U.S.; she was born in Boston), Palestinian (his father was born near Bethlehem, as you will read below), and American (Greg grew up in San Diego and studied law at Yale). Throughout our days in Jerusalem, Hebron, Nablus, Ramallah, and Tel Aviv, I listened hard as Greg shared stories of his own young-adult discovery of his Palestinian heritage and how different his life in the U.S. had been from those of his father’s relatives here.

But then Greg also shared the experiences of his Israeli friends and colleagues with such gentleness that we could hear his true empathy for both sides of the Mideast experience. My fellow travelers and I wanted answers—a quick fix or at least a defined solution to the prejudice and pain we saw all around us—and, with Greg Khalil, that would not be possible.

With Greg, nothing is certain, or quick. He absorbs all viewpoints and reflects back more questions than answers. He stands on one principle that he holds dearer than life itself: the potential of people to—as hundreds of Telos travelers have done—transform through the simple knowing of the other, and then wage peace in the face of anything.

Read here, in his own words, why Greg refuses to give up on the possibility of peace in the Mideast and all around the world . . . and look for the full version of Greg’s life-work in MY JOB.

Greg’s Story in His Own Words: From “Breakfast with Issa”

The excerpts below are from “Breakfast with Issa” a personal essay authored by Greg, which can be found in its entirety here. 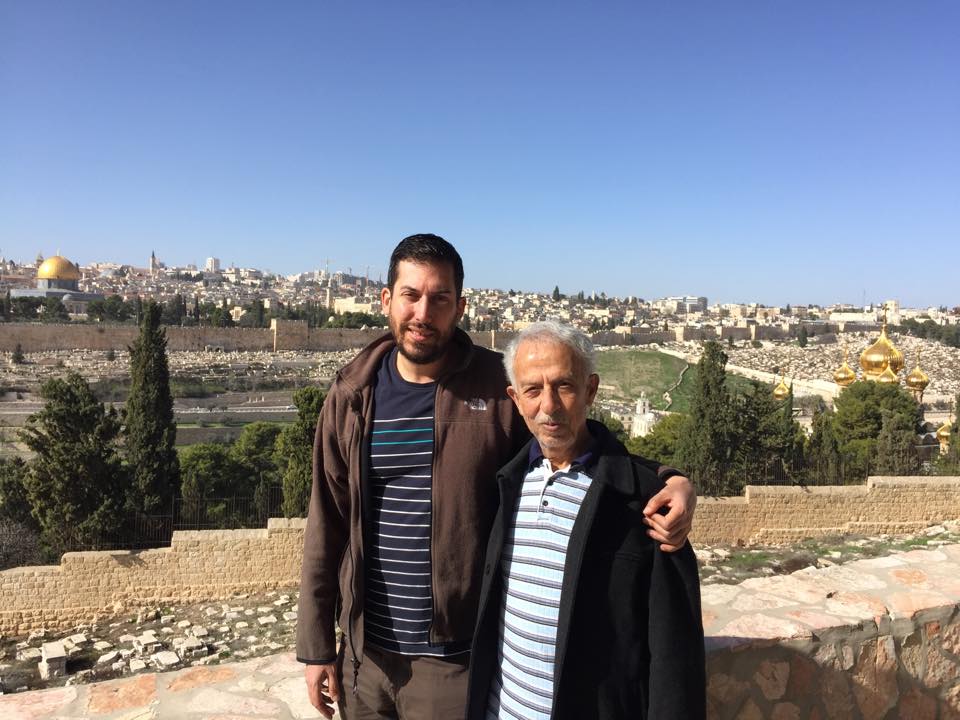 Greg and his father, Issa. Photo by Greg Khalil.

Is There Any Hope?

Almost every day someone will ask me why I bother “wasting” my life on a “hopeless” issue. “Those people [Israelis and Palestinians] have been fighting for thousands of years and they’ll be fighting until the end of days,” the exchange begins.

The question always irks me, even though I often wrestle with it myself. Still, I always seem to have an answer—one that at least I usually find compelling.

Some months ago, I received the same question. Only this time it was truly disturbing. My dad Issa and I were talking over breakfast near his home in San Diego. And I thought I heard a tinge of cynicism from the most unexpected of people, him. Suddenly, Issa’s demeanor uncharacteristically changed. He carefully placed his coffee down. His smile waned. He looked me straight in the eye.

“Is there any hope in the work that you do? Or will the hotheads always win?” These were words I would have never expected to hear from him, about anything, ever. . . .

I looked at him, almost incredulous. I had to be misinterpreting him. Still I had no choice but to admit: “Well, things have never looked worse in the Middle East. I think there’s a good chance the ‘hotheads’ will continue to win.”

Dad seemed to agree, so I continued: “But they don’t always have to win. And as impossible as it might now seem, I see dramatic shifts happening. Those shifts lead me to believe that peace will be a real possibility soon. Maybe not for a few years. But soon.”

I felt compelled to talk a bit about the “work that I do.” I explained how I find myself caught in such an awkward place, suspended in the most bizarre limbo between two competing trends, one deeply negative and one potentially transformative.

On the one hand, I’m in the Middle East almost every month, witnessing at breakneck speed a rapid decline in the situation on the ground. And with it, Israelis and Palestinians increasingly believe peace to be impossible. Yet on the other hand, I’m typically there with influential Americans, often Americans of faith, bearing witness firsthand to their remarkable transformations— which I believe to be hugely significant.

In fact, I pressed, my colleagues and I had stumbled onto an approach that we believe might one day soon condemn the Israeli/Palestinian conflict to history’s dustbin.

“Really?” he asked. My dad didn’t seem too impressed by my exuberance, which nevertheless rang familiar. He followed up with “hmmm, that’s interesting,” which is dad speak for “I’m glad you’re excited but that’s ridiculous.”

I knew I would need to explain.

Beginning at the End of the Story

So I started at the end, affirming a gleaming truth that I believed must inform all engagement with the region: The only way forward in the Holy Land will promote the security, dignity and freedom of every Israeli and every Palestinian. Either everyone wins or no one wins. Israel isn’t going anywhere. And millions of Palestinians aren’t going anywhere, either.

And then I began working myself backwards: America has always played—and will continue to play—a pivotal role there, whether we like it or not. And the region will continue to affect our core security interests, whether we like it or not. So it’s not a question of whether we’re involved, but how. Without positive and shrewd American engagement, our allies and friends will suffer and we will jeopardize American core strategic interests.

That shift won’t happen, however, without American citizens calling for such engagement. And since it is the Holy Land, American faith communities might, in fact, hold the key.

My dad seemed to be listening. So I kept talking.

Where the Solution Waits (Hint: It’s Not with the Politicians)

I told him that I was now witnessing something remarkable. Among the leaders I often accompany to the Holy Land and their communities back home, I see a deeply moral and informed view on Israel and the Palestinians quietly flourishing. These folks realize that as much as we might like to, we can’t just throw up our hands and walk away. Yet they also see that for too long the lines of engagement have been drawn too rigid: To be “pro-Israel” is to be “anti-Palestinian” and vice versa. While Israel is like family to America, and America would never turn its back on friends or family, there could be no stability or justice for anyone there without security, dignity and freedom for everyone, in equal measure.

Yet many Americans, particularly Americans of faith, have unwittingly helped entrench this destructive either/ or dynamic: Typically acting out of the best intentions, they have rushed to the defense of one side at the expense of the other. In so doing, they often ignore both very real justice issues, which complicate things for everyone, and the overarching, gleaming truth, that whatever side they feel most connected to will only know peace if and only if the other side does too.

Now I believed a new day in America was fast approaching. I believed we would one day soon witness Americans of all stripes—Republican, Democrat, believer, non-believer, Evangelical Christian, Jewish, Muslim, conservative and liberal—commit their passions and their energies to supporting American policy that is truly pro-Israeli, pro-Palestinian, pro-American and pro-peace, all at the same time. Would it be enough? I could not know. But could peace ever bloom absent this homegrown American movement? Not in our lifetimes.

We Need to Act Now, Together

The bleakness of the current moment might feel timeless and immutable; but there would be some unpredictable, dramatic shift, as there always is. The long missing ingredient of a diverse, engaged and influential American movement committed to the wellbeing of everyone in the Holy Land will then, finally, have a chance at righting this ship. Would peace reign overnight? No way. Consequences of conflicts like these last generations. But good people of good will had to urgently prepare, especially because the “hotheads” already wield so much influence.

. . . My father’s words haunt me, hanging like boulders in my all-too-feeble heart: “To seek peace and pursue it, that is always the right thing to do. Especially when it seems impossible.”