Finding My Ancestral Home and Horse Heaven in Kentucky 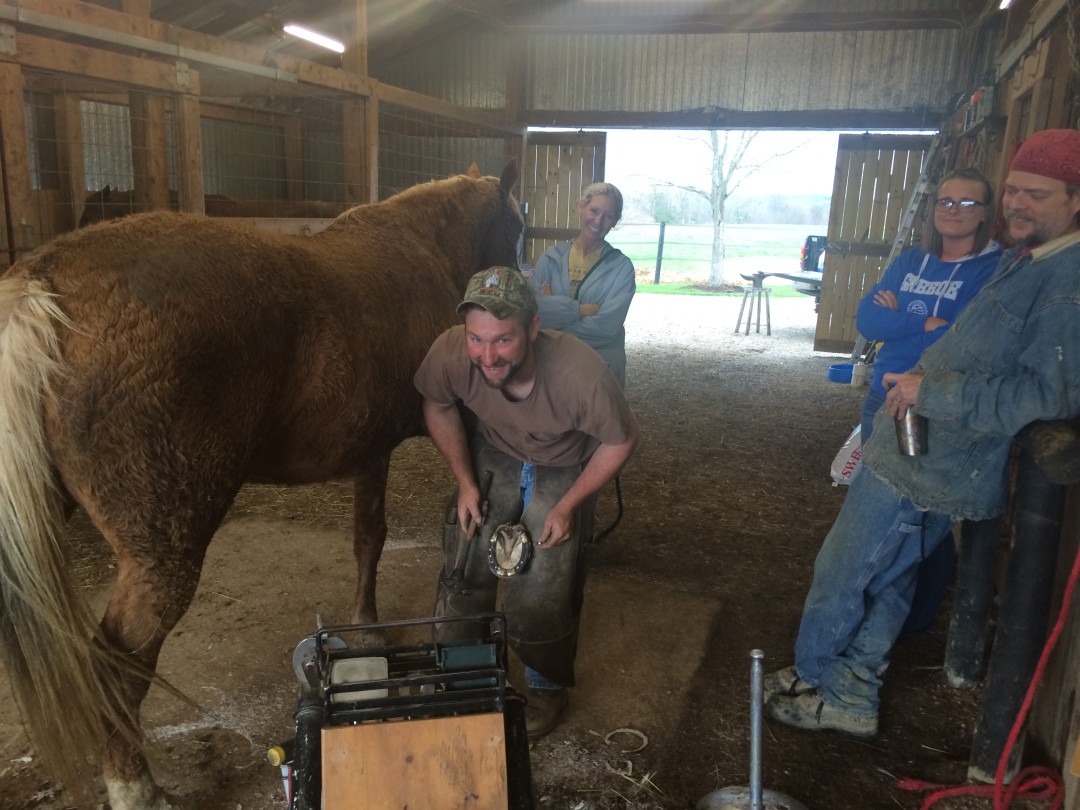 Meandering around the Midwest, interviewing individuals for My Job, I find myself back in the land of my father’s farm-boy roots and in the middle of  what I call “horse heaven.”

Jeffersonville, KY: Years have passed since I’ve visited the Bluegrass State, nicknamed for its fertile soil, lush grasses, and music; but it still looks just the same to me today.

This is where my father, Hugh, grew up as the youngest of nine children on a cotton and tobacco farm in an American-gothic farmhouse in Elizabethtown, Hardin County, population 29,335. My dad was the only one who went on to college. He later earned his masters in chemical engineering during the early years of his marriage, while he and my mom Jasmine had a series of seven babies and built their home just over the Yankee border, in Dayton, Ohio.

My brother Ron grew up to work in accounting and finance, but he always had farming in his blood. He and his wife Shelly eventually bought 57 acres east of Lexington on a horse farm in Jeffersonville, Kentucky. They’ve raised four spirited daughters here. The elder two, Alexandra and Brienne, have launched to graduate school in London and English teaching in Daegu (Korea); the younger two (fraternal twins) will graduate from the local high school this spring. And I, in my California-hippy long skirt and sporty red rental car, am now on my way to visit them.

First, the music changes. As I leave the Cincinnati airport (which is actually in northern Kentucky), the radio stations shift from hip-hop and R&B to almost all country, with a little Christian rock in the mix. Then the terrain: the vast suburban megalopolis of highways and byways, shops and offices, chain restaurants and gas stations, stretches out into wide spaces that remind me why my ancestors loved this land.

This is Kentucky: population 4.4 million with only 100 people per square mile, land of agriculture, auto manufacturing, whiskey and horses, and Kentucky Fried Chicken. Its Iroquois name, Ken-tah-ten, means “land of tomorrow.”

Fresh air flows in my window as miles of rich pastures roll by outside. If I turned West on highway 64, toward Louisville, I’d reach a graveyard in Elizabethtown where my ancestors now rest in peace. But I head East, not quite as far as the Appalachian mountains on the far end of the state. Then I veer off the main highway onto curvy, fast roads that lead to my brother’s home.

Old sedans and jacked-up pickups whiz past. Their drivers know every inch of these roads on which they’ve spent their entire lifetimes. To my left, I see gently sloping hills where cows nibble tender sprouts of new spring grass. To the right, a creek (“crick”) hugs the road. Beyond that perches here an old farmhouse, there a trailer home. The Kentucky landscape intersperses quaint cottages and white-steeple churches with rusted-out abandoned cars and overgrown weeds. Care and squalor compete for the same turf.

And dropped into random spots in-between are bouquets of bright yellow jonquils, riotously celebrating the triumph of another spring.

Kentucky is the homeland of half my blood and the whole of my brother’s family. It’s Ron’s dream come true, manifest by the hands of him and his wife, who’ve worked hard since high school to build a graceful A-frame on their own land. Coming back to see them, from the vantage point of my life in the California suburbs, feels at once quite alien (I could never fit in living here) and sweet: This land gave us our ancestors and our heritage, and it has fed my brother’s soul. 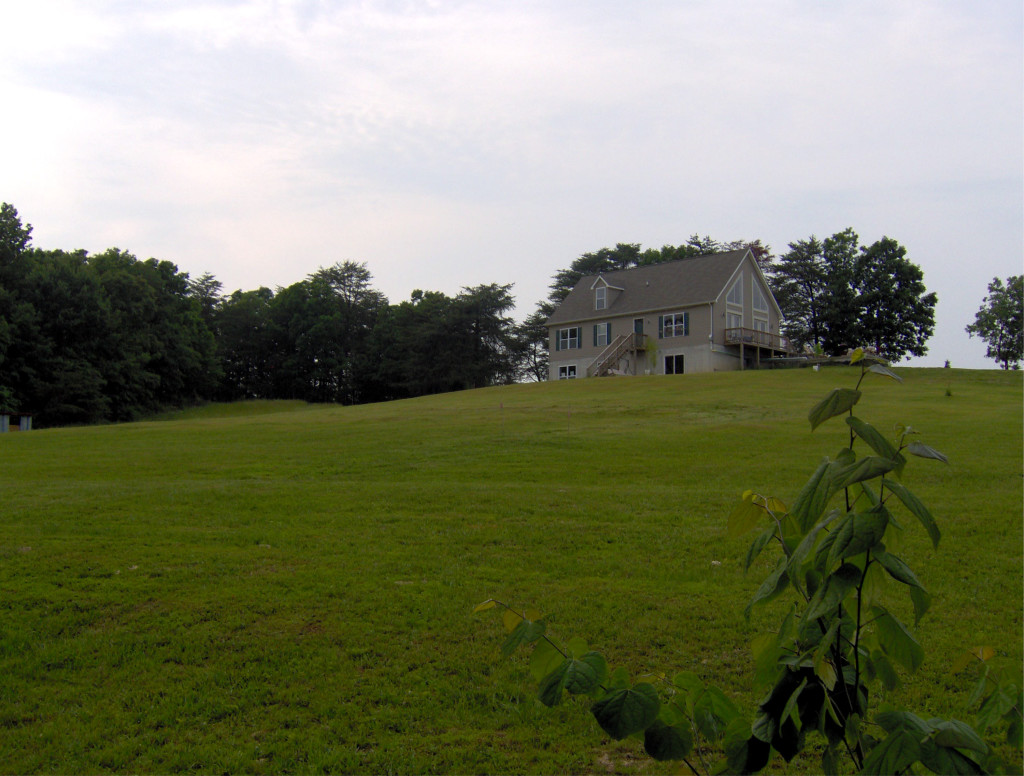 Ron and Shelly’s home in Jeffersonville

Their driveway runs over half a mile of gravel and potholes, past the burned-out former home of a neighbor whose story includes drug trafficking and imprisonment, insanity and murder. The blackened shell teeters, glaring defiantly. I drive past a pen full of crowing roosters and hens, a mob of angry mongrels that charge at my car (windows up now), and the doublewide where the neighbor from the burned-out house now lives.

As I drive up to their house, I count five horses and seven dogs. The animals fulfill their family’s life in a way that chapters in a book do mine. Ron and 17-year-old Tessa take care of the horses. They also ride together.

Tessa’s been on the county horse-drill team since age ten. Ron became a drill-team parent initially to bond with his daughter and help her through preadolescent angst. Then they discovered a shared love of horses, nature, and each other that’s brought them both more joy than all the daily tedium of feeding, grooming, and training. Horses require steady devotion, no matter the whim or weather.

My visit to Kentucky will get me almost knocked over by the dogs, into the pasture during feeding time with the horses, and chortling at the kitchen table long into the evening with my sister-in-law. I’ll get to see a day-old foal closely guarded by his mama mare, and watch a horse being shoed by a second-generation farrier. I’ll ride in Ron’s 2004 Dodge Ram pickup truck with two horses in the trailer behind, heading home just before torrential rainstorms begin. Along the way, I’ll hear stories of trail rides and horse shows that fill their weekends with meaning and their living rooms with trophies.

And I’ll get to interview Robin Little-Basil, an environmental scientist/health inspector turned horse coach, who grew up on the back of Mountain Pleasure horses, the oldest gaited breed native to North America. She and her husband now raise horses and sell them to promote the breed and to offset the cost of her volunteer work with teenage girls and their parents. “If you get a girl on a horse,” she’s convinced, “you’ll keep her away from pregnancy and drugs.” 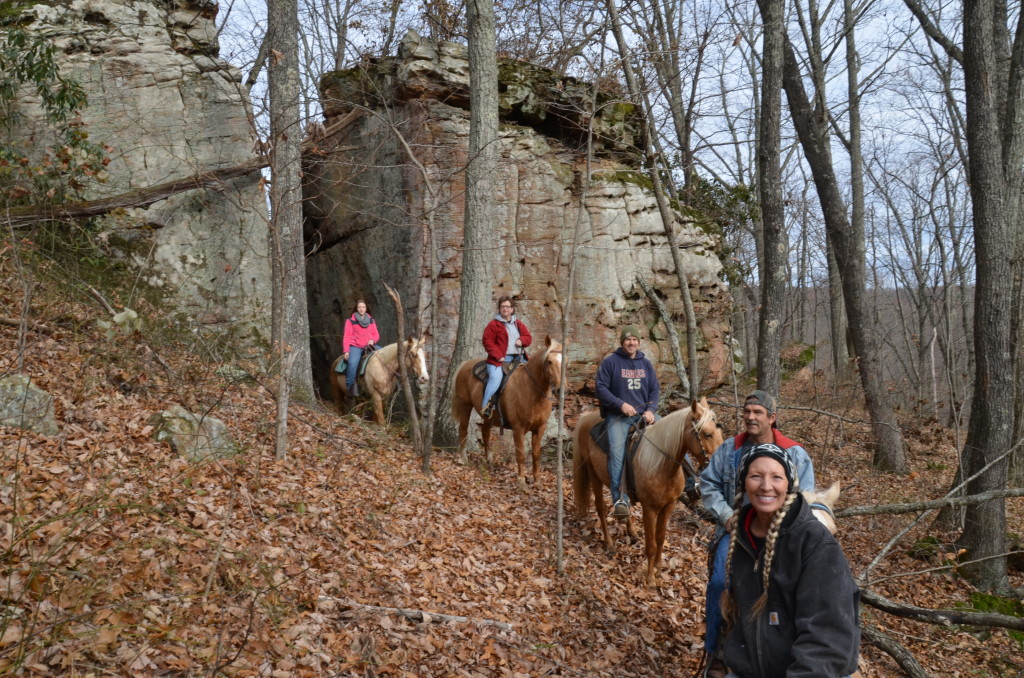 Robin on a trail ride

My brother and his family have become horse people, learning under the guidance of Robin. “Horses just bring me so much joy–and I like sharing that with other people . . . Being around horses all my life has definitely made me a better human being,” Robin muses.

“I was raised by a bi-polar mother and an alcoholic father,” she tells me, “so my ‘personal’ issues have been out on the table, for me, since childhood . . . [But] the chances of tears from me are, well, just not gonna happen (cowgirls don’t cry and all that jazz!); but I’m more than happy to tell you all I can about my little life.—It’s been quite a ‘ride’!” (More to come in our forthcoming published book: My Job: Real People at Work Around the World).

It seems to me as natural as breathing the clean country air (laced with aromas of manure and hay) for horses and humans to live together in harmony. It just might be that, next to Christianity, equestrianism is the local religion. By the time I leave for my next My Job destination, I’ve begun to see the light. Horses make Kentucky a little more like heaven.

← Does Our Job = Our Self? With George, It’s Complicated Imodium in Cambodia →