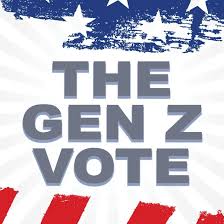 We interrupt our usual storytelling about Gen Zers in fascinating jobs, to focus on another type of power they wield: that of the VOTE.

You’re on track to be the best-educated generation in America, yet, with 57% enrolled in a four-year college compared to 52% and 43% with the next-youngest cohorts. You’re more likely to have at least one college-educated parent, to care about how your government functions (or doesn’t), and to care about climate and your planet.

Two-thirds of Gen Zers believe that Black people are treated unfairly and want to amend that. And you’re the first generation ever to see yourself as global pluralists–equal, not superior, to citizens of other countries.

Your World Spun Out of Control

The COVID pandemic shattered the strong economy and record-low unemployment into which you were poised to graduate. Instead, you limped through the last few semesters online, lucky if you could graduate at all–in a car line or Zoomfest.

Now, according to Pew, nearly half of Gen Zers have a family member who’s taken a pay cut or lost a job. Those rates surpass any other age bracket; and in fact, Gen Zers, who often work in high-risk service-sector industries, are more likely than any other generation to have faced unemployment this year.

Things to know as you check boxes on your ballot:

Gen Zers want their government to take a more active role, and they want to recognize that climate change has been impacted by human behavior.

Meanwhile, a January survey found that 61% of Gen Zers planned to vote Democratic in the presidential race.

However, both parties express support for gay marriage and interracial marriage. Gen Zers are more likely than any previous generation to know people who prefer to use gender-neutral pronouns and to believe that forms and online profiles asking about a person’s gender should include options other than “man” and “woman.”

Gen Zers unite (76%) in a shared belief that the policing system in the United States is broken, and that the Black Lives Matter (BLM) movement is an important way (81%) to correct mistreatment of Black people in this country.

The Collective Power of Z

A survey by “The Hill” disputes the low voter-turnout that history would have predicted; they say 75% of Gen Zers see voting as a duty, not an option.

“It is not difficult to predict that Gen Z is poised to become a major force in this fall’s elections,” says thehill.com, “particularly given the energy that young people are harnessing in protests across the nation against policy brutality and racial inequality. Protest politics can pay dividends at the ballot box.”

As we’ve been saying in our book, MY JOB Gen Z: Finding Your Place in a Rapid-Changing World, Generation Z will not tolerate workplaces, vendors, or a world where diversity of race, culture, gender, and ideas is not only respected but honored. This is the generation that moves beyond words, putting their choices, dollars, bodies, and votes where your values lie.

So let’s come together to build the future that Gen Zers want. The time has come–today!

Check out this video by 18-year-old civil rights activist Nupol Kiazolu from Brooklyn, New York, for why she believes her vote, and yours. MATTER.

Sources: Data cited come from The Hill and Pew.org.