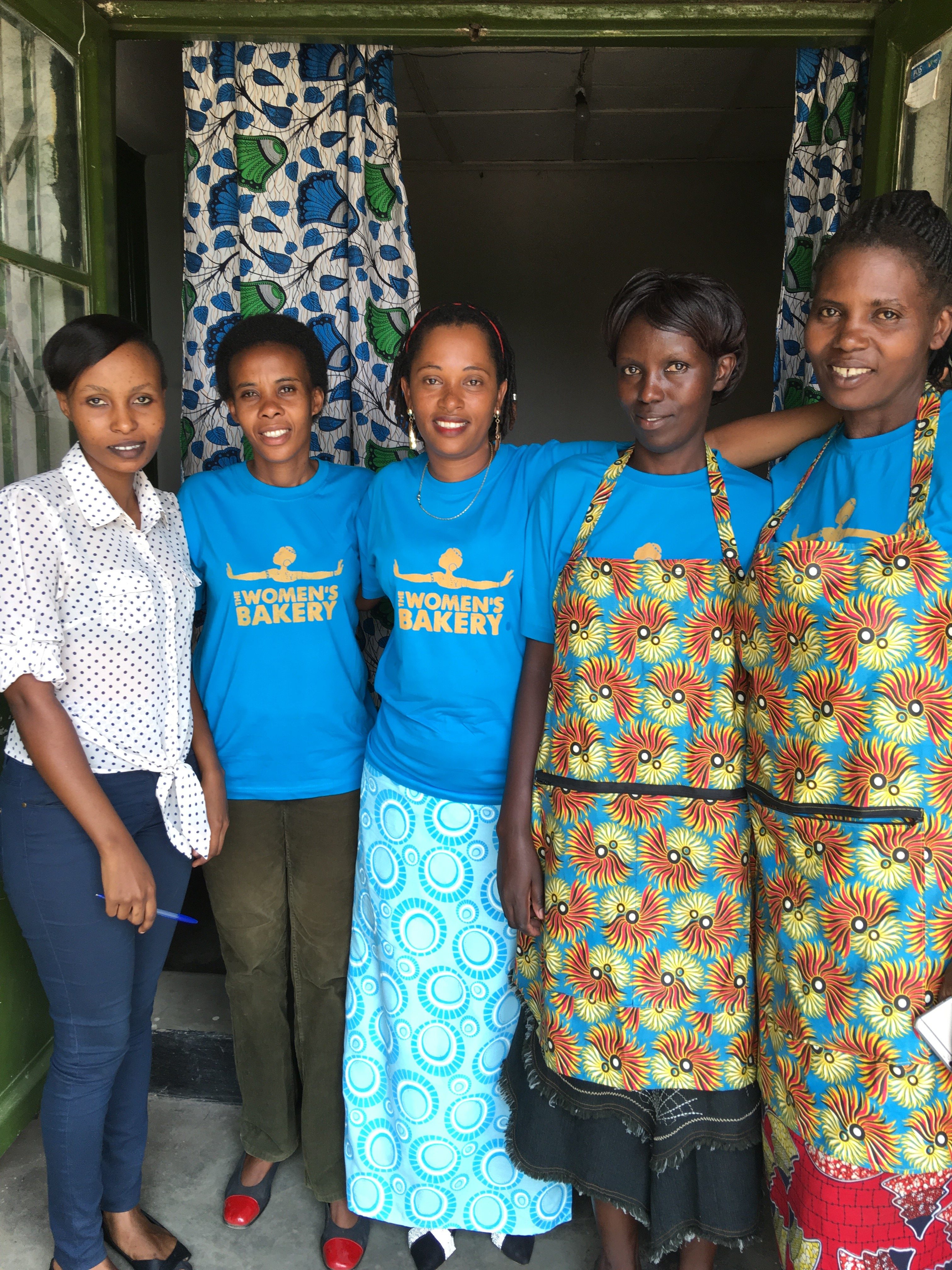 Born in Santa Monica, California, Walker Holmes, age 16, lived in San Miguel de Allende, Mexico from age two until moving to Austin in 2010. A junior at Austin High School, she spent summer 2016 completing an NLSC business and entrepreneurship program at Yale and interned as a research analyst for The Women’s Bakery in Kigali, Rwanda, spending three-weeks in South Africa, Rwanda, and Uganda. She’s traveled extensively, is fluent in Spanish, and is interested in the nexus of design and conscious capitalism. We are thrilled to welcome her to the MY Job community and we thank her for sharing her story with us. For more information, contact her at walker@walkerholmes.com or visit www.walkerholmes.com.

Kigali, Rwanda – When I first arrived in Kigali, Rwanda this summer, I had no expectations for, and little knowledge of, the people and culture of the small East African country notorious for its 1990-1994 civil war and genocide. After spending more than two weeks there, I grew accustomed to its friendly culture, forward-thinking economy, strong sense of community, and healthy lifestyle. I realized that perception doesn’t necessarily equal reality.

Over the summer, I worked with Rwandan-based The Women’s Bakery (TWB)—an education-centric social enterprise committed to empowering women and developing women-owned and operated businesses. I had the opportunity to witness firsthand the impact TWB has had on this area of East Africa.  I also gained a further understanding of how TWB supports communities and contributes to the lives of thousands of Rwandans.

Faith Uwanyirigina, a 37-year-old mother of four, has worked with The Women’s Bakery since the organization opened its first location in Kigali. Since then she has grown exponentially, as a person and a woman.  Like all of the women who work with TWB, Faith’s experience began with their training program. During her training she learned the fundamentals of business: the basic building blocks one must understand in order to run and operate any business, no matter its size or scope.

Every day at 7:00 a.m., Faith (pictured at center in our feature photo) begins work at the bakery by praying with her team of bakers. With their prayers finished, the women divide their roles—who is doing what: cooking, cleaning, preparing the dough, filing paperwork. For each person, one task. When the breads are pulled freshly from the wood-fired ovens, the women begin selling out of the bakery’s storefront. Faith and a few others will then pack up muffins and bread into baskets for walk-around sales in nearby neighborhoods.

After the workday, the women gather to talk about their respective days. What sold out? Leftover inventory? The upsides of the day? What could be improved? And then, after meeting, they draft and file a report. Then there is prepping for the next business day. This often takes until 8 p.m. And then, finally, the women head home. 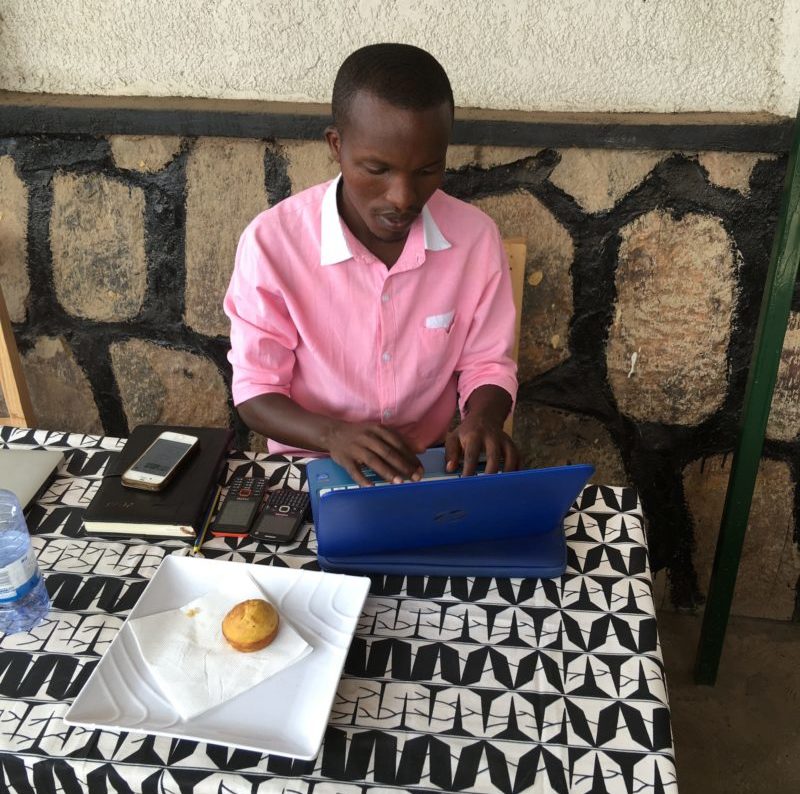 Aimé at work in The Women’s Bakery location in Kigali.

Throughout, the women are supported by Aimé Nshizirungu, The Women’s Bakery’s first Rwandan training manager. At age 29, Aimé is a graduate student, the oldest in a family of six, a hard worker, and a man whose happiness and smile are contagious. For Aimé, positively impacting the lives of women has always been his passion in life. Over his tenure at TWB, he has been able to do just that by offering his knowledge, guidance, and support each day, as he oversees operations and lends a helping hand.

Before Faith joined TWB she was shy: not in the sense of being intimidated by other people, but in disbelief of the worth of her ideas and value as a person.

“At first, I was afraid of starting a business,” Faith said. “But, I learned that you can start small, with something as little as bread, and grow from there. As I was trained on how to run a business and seek opportunity from even the smallest of things, a whole new world opened for me.”

Now, Faith has viable business skills and the encouragement to be a leader in her community, which inspires others in her daily life.

All for-profit and nonprofit businesses and organizations, no matter model or mission, communicate a message to the world around them—some on a global scale, some more locally. To Faith, it’s important to believe in and be passionate about the business in which she’s working. She understands that a job is far more than simply a financial means to an end. She understands it’s part of her social life, part of her value system, and part of the broader community.

“The first thing I learned from The Women’s Bakery is how to prepare a balanced meal and I have now passed this skill on to my children. And, I never thought bread could become a good business,” said Faith.

For Faith, TWB’s work to support women-empowered business was a compelling message and their commitment to fighting malnourishment was the icing on the cake.

Malnutrition, particularly among women and children and in rural areas, is a chronic issue in Rwanda. A 2015 World Food Program report notes that 36.7% of children under 5 years of age show signs of stunting due to incomplete diets. But, the muffins and breads made at TWB are unique compared to most baked goods sold in East Africa because of a specially formulated recipe designed to combat this issue. Incorporating complex, plant-based ingredients, to target valuable vitamins, minerals, and antioxidants, TWB’s products are an important source of holistic nutrition for its customers– and they taste delicious and are affordably priced, to boot.

I asked Faith if she had a message she would like men to better understand, she responded. “I want men to know that women are able, we are capable, we can do incredible things, we deserve value. Men should know that women can do everything; we are building houses, we are doing business, we are involved in politics. We can do it all.”

Faith has always believed in this message. However, for a long time, Faith did not feel supported or empowered enough to embrace her value. What she has learned  with TWB has afforded her the strength and confidence to do so. Simply, when a woman is able to support herself, she, in turn, is able to support her family and inspire a whole new generation of Rwandan women to do the same. In this way, businesses and organizations like TWB are offering entire communities a sustainable means to escape the gravity of poverty.

Rwandan President Paul Kagame himself has noted: “Empowering women and ensuring gender equality ultimately enriches communities and entire nations. This is something that we as Rwandese understood long before gender equality became fashionable or the catch-phrase in development discourse.” And while this is a bitter pill to swallow for many in the West, it does have some merit. In the aftermath of the genocide, Rwanda instituted a strict gender quota in its national parliament, the result of which is that, today, Rwanda is ranked #1 in the world (out of 145 measured) in terms of the number of women represented in government according to the Global Gender Gap Index. Further, Rwanda ranks #1 in labor force participation and #1 in pay equity, leading to an overall ranking of #6 globally. As a point of reference, the U.S. comes in at #28.

Surely, Rwanda has set a standard insofar as institutionalizing gender equity is concerned. Outside of government positions however, the quality of work available for women is lacking, despite involvement at all levels of the workforce. For instance, the Global Gender Gap Index Report shows that Rwanda ranks 96th in terms of women participation in professional and technical work and 115th in tertiary education for women. Where Rwanda suffers however, TWB excels and their position as a “vocational business school” for women, seeks to further Rwanda’s reputation as a pioneer in gender equity.

So, The Women’s Bakery carries forward the vision of the new Rwanda—a country, community, and peoples, who are committed to constant, universal progress.

For more information about The Women’s Bakery, visit www.WomensBakery.com or contact Markey Culver at markey@womensbakery.com.

Photographs courtesy of The Women’s Bakery

← Meet Mama Komaza, Kenya's Queen of Sustainable Forestry What If Your Job Was to Read the Stars? →