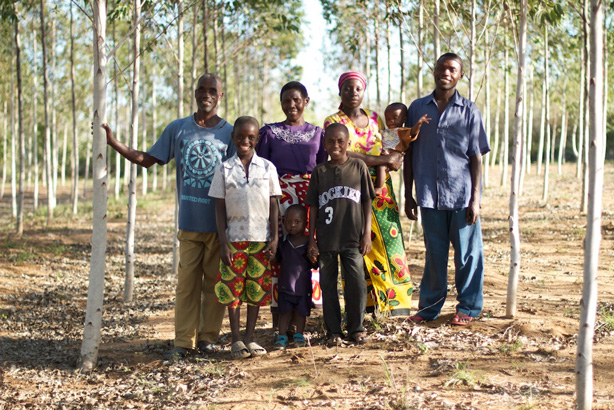 Kilifi,Kenya: Janet Chihanga is a big personality. It is only fitting then, that she is known by many names. In the office that she manages they call her Mama Janet; in the streets she is known affectionately as “Mama Komaza.” The former is likely because of her giant heart and motherly disposition–on full display in the video below–the latter simply because of where she works: at the nonprofit Komaza which fights to improve the lives of Kenya’s farmers while rehabilitating its natural resources.

Komaza operates in a pragmatic area between job-creation and environmental sustainability. Their business model incentivizes farmers to walk away from staple crops like maize that are prone to failure in the arid climate of inland Kenya.

Instead, Komaza founder, American Tevis Howard has found something else that dryland farmers were pretty good at: deforestation. When crops fail in Kenya, farmers typically resort to the sale of charcoal and firewood as an alternative source of income. This ad hoc forestry, however, has the double effect of being less profitable for the farmers and much more detrimental to the environment- by way of erosion and by robbing the soil of moisture.

Seeing the Forest Through the Trees

Howard’s plan was always to provide for immediate needs, while keeping one eye on the future. So, Komaza’s farmers plant more trees than they cut down, thereby combatting erosion through a resilient, sustainable business model. To Howard, it’s a triumph of social innovation with no end in sight: “Over the next 10 years, Komaza’s primary goal is to plant hundreds of millions of trees with over 1 million farmers across East & West Africa,” he says.

“At the end of the day,” he, continues, “our goal is to generate life-changing income for some of Africa’s poorest rural families, develop a sustainable wood supply to curb rampant deforestation, and demonstrate that some big social problems can be solved profitably and at significant scale with innovative win-win-win business models.” Howard, a Brown University graduate with a degree in neuroscience who has been named a “Forbes 30 Under 30” social entrepreneur, moved to Kenya to restore the country’s 80-90% lost tree cover and employ local farmers, 56% of whom live in extreme poverty.

Trees take a while to grow, both literally and profitably; but a Komaza family with a half-hectare of eucalyptus and one hectare of melia can earn 40% more income in the first decade, followed by 250% more income in the second decade. Moreover, microforestry also presents very low opportunity costs to farmers. Woodlots require very little land, and some species can be intercropped with agriculture for zero opportunity cost. After preparing land, planting seedlings, and occasional early weeding, trees continue to grow without further work, making forestry an ideal “set it and forget it” investment, so farmers can continue other productive endeavors as trees mature.

While Komaza has added much needed stability to the lives of Kenyan farmers, they are also helping to drive Africa’s booming construction industry. Perhaps most impressive then, is that Komaza is satisfying the demands of a surging market through a model built on ethical sourcing.

Like the Job Talk blog?  Get it delivered to your inbox by signing up for our newsletter!

← From Street Boy to Sales Trainer: What a Job Can Do in Kenya The Bread and Butter of Empowerment at The Women's Bakery in Rwanda →